You are here: Home / Lakeland and the North / York to Durham

The fast way:  If you just want to get there as quickly as possible (not the best idea) then take the A19 from the centre of York.

Route 1B on the map.

Go to the bottom of the page for those nav. notes. (And go to the Naughty Step for even thinking of it!)

The recommended way  – via the North York Moors

What’s to be seen along the way?

Rievaulx Abbey.  (Pron. reevo). Set in a remote valley in the North York Moors National Park, Rievaulx is one of the most complete, and atmospheric, of England’s abbey ruins.

Castle Howard is an 18th century stately residence, set in 1,000 landscaped acres just outside York. The house, designed by the leading architect of the day, Sir John Vanbrugh, features many major works of art.The grounds include lakes, fountains, temples and woodland as well as formal walled garden and children’s adventure playground. 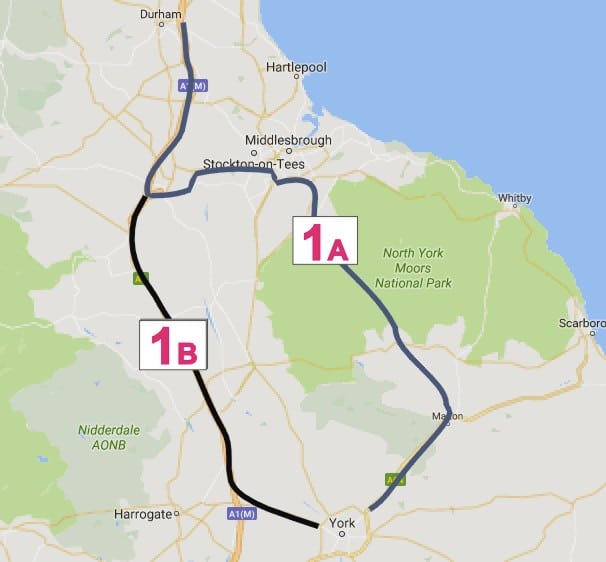 Click here for an interactive map of the area

In early summer you’ll hear the call of the moorland birds, such as the red grouse, curlew and golden plover. Later, as the summer evenings draw in, the flowering heather turns the moors into a purple carpet that stretches for mile after mile. In winter the moors can be exceptionally beautiful, with mist and cloud rising above the sweeping expanses and crisp dustings of frost and snow turning the landscape an ethereal white.

The big attractions here are Durham Cathedral and nearby Durham Castle in this UNESCO World Heritage Site, standing side by side on a prominent hill top and encircled by the wooded slopes of the meandering River Wear. Durham Cathedral was voted the UK’s number one landmark in 2013. Started in 1093 and completed in 1133, it is the finest example on Normal church architecture in the country. Marvel at the work of the stonemasons that created the richly ornamented interior, particularly the vaulted ceiling – it was the first church to use ribbed vaulting on such a scale.

The castle, built in the same times at the cathedral, guards the approaches to the city from a narrow spur of high ground. It was built shortly after the Norman invasion in 1066, not only to defend against raiders from the north, but also to suppress English rebellions that were common in the first years after the conquest.  Today it is occupied by Durham University.  It is open to the public but admission is by guided tour only.  For more on this click here . . .

Durham Museum and Heritage Centre  Relive the story of Durham from Medieval times to the 20th century in this local history museum. See models of the medieval city and 19th century Market Place and explore the reconstruction of a Victorian prison cell. Displays describe the origins and development of the city and many of the  objects illustrate domestic life, social life and the lost trades and industries. The museum is situated in a historic Grade I Listed Building, close to the Cathedral, once the parish church of the North Bailey. It was rebuilt in the 17th Century and retains impressive woodwork from that period.

Distance about 15 mi, time a bit under half an hour.

From the gates of Castle Howard, at the giant obelisk, turn r. on to the road to Slingsby.

At the Malt Shovel in Hovingham you can get a good pub lunch and with luck there’ll be a few of the local farmers in the bar – you’ll hear the sounds of the rural Yorkshire voice. The toilets there are also very clean.

On this stretch of road you have the Howardian Hills to the w. and you are beginning the climb up to the North York Moors.

Expert navigator checkpoint:  Shortly after that turn, look for the ruins of Castle Helmsley through a gap in the row of shops on the l, and slightly further on Helmsley Church on the r.

Just out of Helmsley you will enter the North York Moors National Park.

11.8  mi The Hastie Bank Lookout is on the r.  Stop and take in a view  of the hills and dales of Cleveland.

Go through 2 r/bouts on the southern outskirts of Middlesborough.

Expert navigator checkpoint:  Shortly after that turn you will pass under a pedestrian overbridge.

There is a parking building at the shopping centre – the closest one to the Cathedral and Castle. Other parking options are signposted.

Durham Castle and the Cathedral are now over to your left.

You are now in the centre of Durham.

To do that you’ll take the A59 from the centre of York and follow signs to the A1.

Expert navigator checkpoint:  The Chiropractic 1st clinic is on the left as you make that turn.

Durham Castle and the Cathedral are now over to your left.

You are now in the centre of Durham.